Running in the Snow! The Health Benefits of Outdoor Exercise 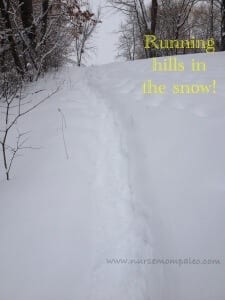 Minnesota is getting nailed with snow right now and I could not be happier for two reasons:

1) I don’t have to commute to work today

So with our current snowfall averaging 1″ per hour I hit the trails. Exercise in the outdoors is superior to hitting the old treadmill (aka cortisol inducer) for a number of reasons. Mark Sisson writes extensively about moving often and lifting heavy things and he is known for beach running while toting large objects (snow running feels very similar to sand running). Well, out there bounding through the snow banks, I felt a bit like Grok! I made sure to do a few sprints as well (like any good Paleo person would do!). Sprints are something that I have incorporated into my running and have seen great benefits. I have also minimized my long runs in an attempt to decrease my adrenal stress. But on a day like today I had to put in a longer run because the benefits outweighed the negative cortisol effect.

Here are some of the benefits of exercising outdoors:

Check out how deep the snow was on the trails in my photo below. It’s still coming down….I might just have to go out for round 2 later on! 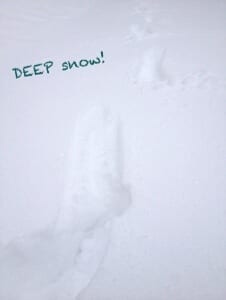