Does Your Diet Influence How Well You Sleep?

Too little sleep is known to impact your eating habits, appetite, weight gain and other metabolic functions, but little is known about whether different diets play a role in how well you sleep. A new study evaluated the diets and sleep patterns of more than 4,500 people and found distinct dietary patterns among short and long sleepers.1

While the study was only able to generate hypotheses about dietary nutrients that may be associated with short and long sleep durations, it did yield some interesting data. Participants were grouped into four sleep groups:

Here are some of the dietary characteristics uncovered about each sleep group:

As for what the data means, researchers aren’t yet sure. They’re using it as more of a starting point from which to base future research:

“Future studies should assess whether these associations are due to appetite dysregulation, due to short/long sleep and/or whether these nutrients have physiologic effects on sleep regulation.

Certain Foods are Known to Help Promote (and Disturb) Sleep

Many people grew up drinking a glass of warm milk before bed to help lull them into sleep, and you may have “graduated” as an adult to a cup of warm chamomile tea, which is known for its calming properties.

Certain foods, too, are known for their sleep-inducing effects. Cherries, for instance, are a natural source of the “sleep hormone” melatonin, and drinking tart cherry juice has been found to be beneficial in improving sleep duration and quality.2 Alternatively, almonds and spinach are rich in magnesium, which is known for promoting sleep and relaxing muscles.

Of course, the converse is also true in that certain foods can significantly interfere with your sleep. Anything with too much caffeine would certainly be among them, but so would spicy foods before bedtime, which are linked with more time spent awake during the night and taking longer to fall asleep.3

In general, you want to avoid before-bed snacks, particularly grains and sugars. These will raise your blood sugar and delay sleep. Later, when blood sugar drops too low (hypoglycemia), you may wake up and be unable to fall back asleep.

How Sleep Impacts Your Appetite and Your Weight

If you’re someone who likes to “burn the midnight oil,” either by choice or because you have difficulty sleeping, you probably expect it to make you feel groggy and irritable the next day. But did you know that it can also seriously alter your appetite?

When you’re sleep deprived, leptin (the hormone that signals satiety) falls, while ghrelin (which signals hunger) rises. In one 2010 study, researchers found that people who slept only four hours for two consecutive nights experienced:4

This combination leads to an increase in appetite. Additionally, sleep deprivation tends to lead to food cravings, particularly for sweet and starchy foods. Researchers have suggested that these sugar cravings stem from the fact that your brain is fueled by glucose (blood sugar); therefore, when lack of sleep occurs, and your brain is unable to properly respond to insulin (which drives glucose into brain cells) your brain becomes desperate for carbohydrates to keep going.

If you’re chronically sleep deprived, consistently giving in to these sugar cravings will virtually guarantee that you’ll gain weight. Further, according to research published in the Annals of Internal Medicine,5 after four nights of sleep deprivation (sleep time was only 4.5 hours per night), study participants’ insulin sensitivity was 16 percent lower, while their fat cells’ insulin sensitivity was 30 percent lower, and rivaled levels seen in those with diabetes or obesity.

This too is a surefire way to gain weight, as the insulin will seriously impair your body’s ability to burn and digest fat. It also increases your risk of diabetes. In short, sleep deprivation puts your body in a pre-diabetic state, which can lead to increased weight and decreased health.

When You Eat May be as Important as What You Eat

Emerging research suggests that the timing of your meals, for instance eating very late at night when you’d normally be sleeping, may throw off your body’s internal clock and lead to weight gain. For instance, artificial light, such as a glow from your TV or computer, can serve as a stimulus for keeping you awake and, possibly, eating, when you should really be asleep.

In one study, mice that were exposed to dim light during the night gained 50 percent more weight over an eight-week period than mice kept in complete darkness at night.6 They also had increased levels of glucose intolerance, a marker for pre-diabetes. The weight gain occurred even though the mice were fed the same amount of food and had similar activity levels, and the researchers believe the findings may hold true for humans as well.

When mice were exposed to nighttime light, they ended up eating more of their food when they would normally be sleeping and this lead to significant weight gain. However, in a second experiment when researchers restricted meals to times of day when the mice would normally eat, they did not gain weight, even when exposed to light at night.

Are You Better Off Eating Your Biggest Meal at Night?

We’ve all heard the advice that breakfast is the most important meal of the day. But some experts believe that skipping breakfast and eating your main meal at night may actually be more in-tune with your innate biological clock. Routinely eating at the wrong time may not only disrupt your biological clock and interfere with your sleep, but it may also devastate vital body functions and contribute to disease.

According to Ori Hofmekler, author of The Warrior Diet:

These two parts of your autonomic nervous system complement each other like yin and yang. Your SNS, which is stimulated by fasting and exercise, keeps you alert and active with an increased capacity to resist stress and hunger throughout the day. And your PSNS, which is stimulated by your nightly feeding, makes you relaxed and sleepy, with a better capacity to digest and replenish nutrients throughout the night. This is how your autonomic nervous system operates under normal conditions.

But that system is highly vulnerable to disruption. If you eat at the wrong time such as when having a large meal during the day, you will mess with your autonomic nervous system; you’ll inhibit your SNS and instead turn on the PSNS, which will make you sleepy and fatigued rather than alert and active during the working hours of the day. And instead of spending energy and burning fat, you’ll store energy and gain fat. This is indeed a lose-lose situation.”

Are You Eating Right for Restful Sleep?

Researchers are only beginning to tease out the complex relationship between your diet and your sleep, but it did appear that one similarity among the “normal” sleepers was attention to eating a varied diet. If you need some help in this area, check out my nutrition plan for a step-by-step guide to optimizing your eating habits.

And, if you need tips for getting a more restful night’s sleep, be sure to read my 33 secrets to a good night’s sleep. 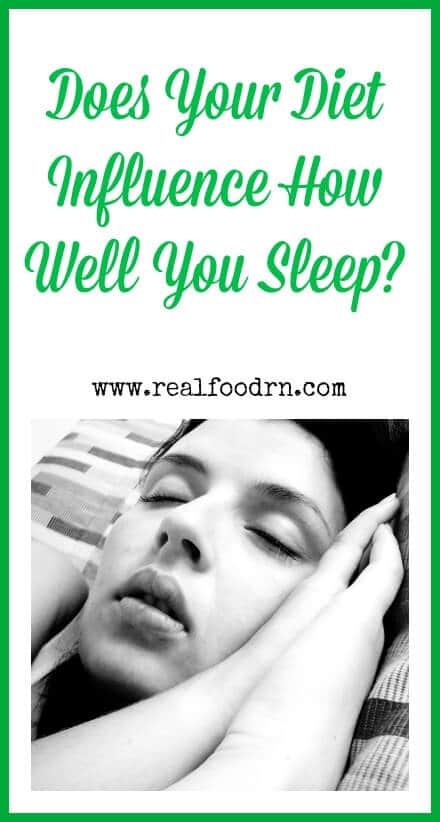 One Reply to “Does Your Diet Influence How Well You Sleep?”